The title might sound familiar but this post has nothing to do with the Amish Tripathi's Shiva Trilogy, the best-selling mythological fiction series in India.

The article is about three, century old Shiva Temples of Calcutta, surviving through years of ignorance and atmospheric erosion while serving hundreds of devotees everyday. In fact though I named this post a Trilogy and planned three consecutive articles but in future it can easily and certainly be extended to form either a tetralogy or a pentalogy or even a decalogy, considering the number of significant shrines in the City !!

Hindu Temples in the City are a common sight now-a-days but an inevitable question is: How old are they? Various sources suggest that few of the City shrines dates back to Job Charnock or probably before that. Prosperity of a religious shrine always depends upon the people surrounding it and Calcutta was no exception. People used to inhabit Calcutta (or more specifically Sutanuti, Kolikata and Gobindapur) since the early seventeenth century, long before Job Charnock settled here. Lord Shiva and various forms of his consort Parvati, were the most worshipped divine entities. It was almost customary that the ancient rich and aristrocratic families of the City establish temples of Lord Shiva, either in their residences or in the locality or on the bank of river Ganges. In the year 1856, there were 24 Shiva temples in Calcutta compared to only 5 temples of goddess Kali, a popular form of Parvati.

This trilogy is an attempt to uncover the past of three ancient Shiva Temples of North Calcutta, situated within a radius of 1 km but almost unknown beyond its daily visitors.

Let's start our journey from an area on which an entire history book can be written. The location is Nimtalla, where every 50 metres walk can give you an untold (hi)story. For the past two months, my fellow blogger Deepanjan Ghosh a.k.a. Concrete Paparazzi and I, was exploring this part of the City like never before. On the very first leg of our expedition, we explored DURGESHWAR SHIVA TEMPLE located at 16, Md. Ramjan Lane. At the first glance, the dilapidated massive structure really amazed us. 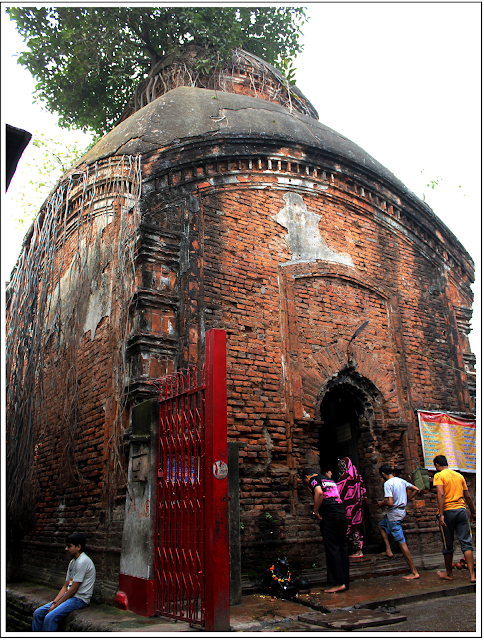 How old is the Structure? -

The temple, built in typical eight slanting-roof style (Aatchala), surrounded by a small adjoining premise, has three entrances on each of its North, South and West side. A black stone plaque, placed above the west door, reveals the details about the foundation of the temple.

Written in old styled Bengali script, it is difficult to read but summarily it states that the temple or precisely the Shiva Linga (the phallus) was founded by the sons of Shri Madan Mohan Dutta in 1716. The majority of the properties in the area was once belonged to the Dutta family of Hatkhola, an aristocratic Bengali family of Calcutta having their century old residence near the temple. Rashiklal Das Dutta and Jawaharlal Das Dutta were the two sons of Madan Mohan Dutta and their names were inscribed at the base of the phallus along with that of the sculptor, Sri Gadadhar Das. But the confusion is what '1716' stands for? Because, mentioning Christian era in an ancient Hindu temple plaque, that too written in Bengali, is highly unusual and 1716 can't be the Bengali year as well, since currently it is only 1422.

The answer lies in the Phallus itself. Beside the names of the founders i.e. the Dutta brothers, the year is mentioned as 1201. If we presume it to be the Bengali year then it would be 1794 CE (1201+593) which in turn if converted back to the Shaka era then it would be 1716 (1794-78). Hence it does make sense. Mentioning Shaka era in the foundation plaque was a common practice and can be seen in other temples of Bengal as well. [Explanation: Shaka era is ahead of Christian era (CE) by 78 years and CE is ahead of Bengali year by 593 years]


Who was Madan Mohan Dutta? -

Not much is known about this Bengali gentleman. Various sources suggest that he was a wealthy trader and a respectable citizen of colonial Calcutta. Probably this notable ancestor of Hatkhola Dutta family was involved in the business with the British. But it is indubitable that he was an influential person of that time. His name and signature can be found in a petition of 1766, submitted to the British Governor when Radhacharan Mitra, the grandson of Black Zamindar Gobindaram Mitra, was accused of forgery by the British and sentenced for capital punishment according to the English law. 95 notable people of the then Calcutta signed this petition requesting the Governor to revoke the death penalty. Madan Mohan Dutta was one of them.

If Madan Mohan Dutta was alive in 1766 then it also corroborates the fact that the temple was founded in 1794 by his two sons. The use of the prefix 'Das' before the surname 'Dutta' in the names of his sons probably indicates their devotion to the Lord Shiva. In Bengali, 'Das' literally means 'an ardent follower'.

The Temple and the Shiva Linga -

Built in the Aatchala style (eight sloped-roof) of Bengal temple architecture, prevailing in Bengal in 18th and 19th century, the structure is indeed a massive one and not many temples of this size exist in Calcutta. Compared to its area coverage the height is much out of proportion. Length of this Aatchala mandir is about 24 ft, breadth is about 29 ft and height is almost 50 ft.

The temple facade was once decorated with Terracotta works and artistic creations in Pankha style. With the passage of time, the designs and motifs were all gone leaving only a few traces. 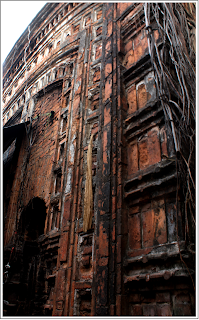 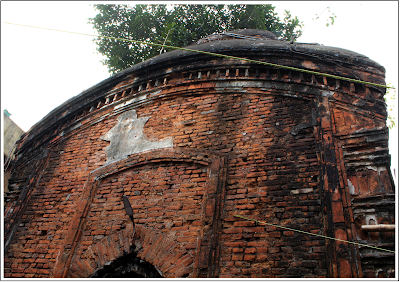 Inside the temple, it is difficult to guess the actual colour of the walls and images of various deities from Hindu pantheon are all over the sanctum-sanctorum.

The Shiva Linga, built in black stone is also a gigantic one measuring almost 10 ft in height. An iron ladder is attached to the Phallus so that the devotees can conveniently pour milk and water on the Stone. Considering the size of the entrances it can be assumed that the Linga was sculpted inside the sanctum-sanctorum, not brought from outside. 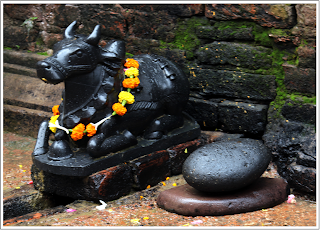 Regarding the temple, two misconceptions are there among the daily visitors, local people and some literary sources mentioning the temple. The first one is if you ask the local people about the temple they will tell you that it is 300 years old, assuming the foundation year as 1716 but as I stated above, right now it is 222 years old. The second one is about the face of the temple. In some works, the shrine is mentioned to be west facing, taking the entrance bearing the plaque as the front one. But it is actually North facing since the black stone idol of Nandi, the bull, is at the left side of North entrance. In Hindu religion, Nandi, the bull serves as the mount of the God Shiva and the gatekeeper of his abode.

Shiva and his consort Parvati are known by various names through the regions and temples of India. The word 'Durgeshwar' literally means the God to the Goddess Durga (Durga + Iswar) i.e. her husband Lord Shiva.

Another intriguing point is the glossy black stone linga. H.E.A. Cotton had also mentioned in his Calcutta: Old and New that these polished stone phallus are rare in specimen. 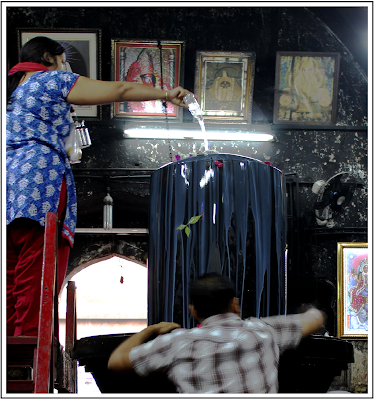 From the Ahiritola-Jorabagan crossing, Nimtalla Ghat street starts, extends towards the Hooghly river in the west and ends meeting the Strand road, just before the Circular Railway track. At the junction, there stands Niyamatullah mosque on the right. Beside the mosque, a narrow lane is there. Take a walk into the lane from Nimtalla Ghat street and the Durgeshwar temple will be on your left.

The temple opens in the morning at 4.30am and visitors are allowed till the noon and again it opens at 3.30pm in the afternoon and serves till the evening although you can have a sight of the Shiva Linga in odd hours through a small hole on its southern door. 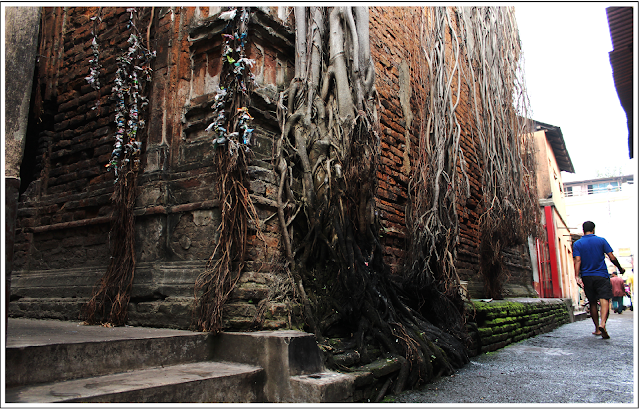 From Durgeshwar Temple, we proceeded towards our 2nd destination in the list - Rameshwar Temple at Nandaram Sen Street, which forms the Part 2 of this trilogy.