It is not everyday that you get to know the best in class bloggers and photographers of Kolkata through a single walk. Oxford Bookstore made it possible and for me it was a golden opportunity. So I decided to board 'no 11' on 10th October from Maniktala at 7.30 am sharp.

The objective of the journey was to explore the landmarks of Bengali literature and stalwarts, organized as the part of the APJ Bangla Sahitya Utsob 2015 in association with Oxford Bookstore, Streets of Kolkata, Kolkata Bloggers and Bengali Wikipedia. Our pilot was Mr. Amitabha Gupta (Heritage Enthusiast, Travel Writer and Photographer) who had not only chalked out the route but also lead throughout from the front. My co-walkers include some prominent names of Kolkata's blogger and photographer community - Deepanjan Ghosh, Indrajit Lahiri, Soumya Shankar Ghosal, Sammya Brata, Srotoswini Svetlana Baghawan, Indrajit Das, Sumit Surai, Subhadip Mukherjee to name a few.


The route was mainly centered around the Maniktala-Amherst Street area which was once the Home and Workplace of leading people of Bengali Renaissance.

"It takes a great deal of courage and independence to design your own image instead of the one that society rewards, but it gets easier as you go along"

But in reality it is not that much easier. Imagine that you are travelling through the city streets in your car or by a local train. A group of transgender appears before you. They are demanding money. What will you do? You will give them some bucks and just want to get rid of them. But have you ever thought what force them to 'beg'? The most prominent reason could be that they are deprived of a definite and respectable social status and it is reflected every now and then in our attitude towards this community.

- Where the above lines are taken from?

If you are a Bengali then no reward for the correct guess. But if you are wrong then you are not a Bong!! And you certainly deserve "৩ দিনের জেল আর ৭ দিনের ফাঁসি". Yes, it's the baritone that gives you goosebumps every year, on an autumn dawn, right from your childhood. It's the gateway to the greatest celebration of Bengali community, Durga Puja. It is 'MAHISASURAMARDINI' or 'The Annihilator of Demon Mahisasur', a Bengali-Sanskrit oratorio that has become synonymous with the celebration in the last 83 years.

WANDERLUST, in the first of its two Puja Special Posts, explores the legacy of this audio montage...

These days there are more than dozen parks in Kolkata that serve as the favourite strolling area of the City's residents. Elliot Park, Citizen's Park, Eco Park are only to name a few of the biggies. There are also hundreds of smaller ones scattered around different neighbourhoods. But like many other things we owe the concept of parks too, to the Britishers. In those days, it was the height of gentility for the British East India Company's covenanted servants to take their spouses for an evening stroll or moonlight fete. Almost 300 years ago, the first of its kind Park in the then Calcutta was Captain Perin's Garden in Sutanuti area which was later developed into Bagbazar neighbourhood. The Garden was sold in around 1752 and post Plassey Battle, Laldighi or the Dalhousie Square was advanced and used as the public garden. Later on, two more parks were developed on the surrounding grounds of Fort William commonly known as 'Green before the Court'. Those are Eden Garden and Curzon Park.

When we talk about Eden Garden, in 99% cases we refer to the internationally famous Cricket Stadium but what we ignore is the fact that the Stadium owes its name to the adjacent park, the brainchild of Lord Auckland, Governor General of India during 1836-42.

WANDERLUST brings before you the story of a 150 years old BURMESE PAGODA, situated in the Eden Garden, unfortunately obscured from the public memory due to the never-ending renovation process.

AUGUST 1947.
India awaiting Independence
More precisely Undivided India awaiting Partition
Millions of refugees are trekking across the newly drawn Borders
The Price of Freedom has been paid by Massive Bloodshed

Bengal was no exception. The memory of Direct action Day or Great Calcutta Killings of August, 1946 had not yet been faded. Tension were once again surging up in Bengal, between the two communities, Hindus & Muslims. It was the time when Mohandas Karamchand Gandhi arrived in Calcutta (Kolkata).  His month long stay helped to brought down the violence and peace was restored in the City. HYDERI MANZIL in Beliaghata was his address during the mission. Later on it was converted to a museum and rechristened as GANDHI BHAWAN.

In the context of Gandhi Birthday, WANDERLUST presents to you GANDHI BHAWAN or HYDERI MANZIL, where Mahatma Gandhi spent the moment of Independence on 15th August, 1947. 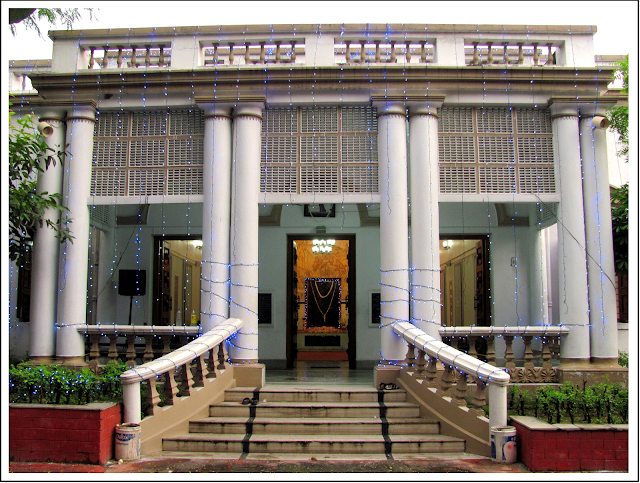