Calcutta has always rolled the red carpet for the people belonging to different religions. Communities with diversified religious beliefs co-existed here for centuries, making the City of Joy a melting pot of cultures. That’s why it’s not very uncommon to find a Christian Church in a Muslim neighborhood or a Jewish cemetery in a predominantly Hindu locality. Unlike any other city of India, Calcutta is packed with mosques, synagogues and churches, apart from the temples belonging to various religions. So when we discovered a Buddhist monastery, while roaming around the streets of South Calcutta on a Sunday morning and that too in a predominantly Non-Bengali locality, it didn’t surprise us at all. Ultimately it is the cultural capital of India.
- Abhijit & Subhabrata 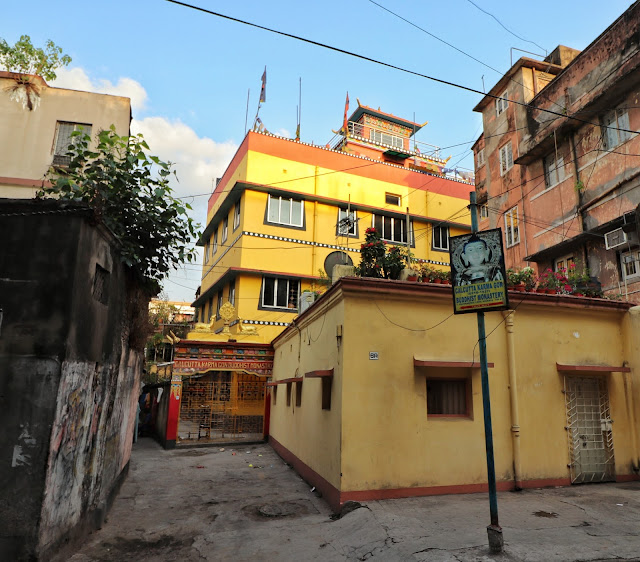 Abhijit & Subhabrata, the explorer duo and long-time friends of mine, have a habit of traversing through the veins of Calcutta, to discover something new. This time they find and dig up the history of a only-of-its-kind religious shrine from the City. Read on, they write for WANDERLUST...

At about 400 meters from Padmapukur bus stand, Lansdowne, amidst bunch of high-rises and luxury cars, is standing the Calcutta Karma Gon Monastery. With lots of questions on our head we stepped forward into the shrine and a young man, Karma, who is in the charge of it for the last seven years, showed us around and briefed us about the place. 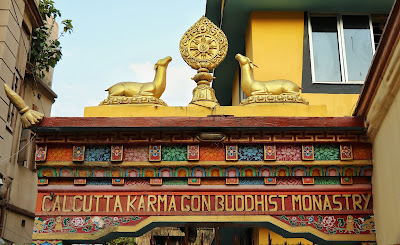 The monastery inherits its name from the original Karma Gon (literally meaning 'the temple of Karma') Monastery of the Karma Kagyu ('g' is silent) sect of Tibetan Buddhism founded in the 12th century by Düsum Khyenpa, the 1st Karmapa Lama, in the Kham province eastern Tibet.

Buddhism can broadly be divided into three schools; Theravada or the orthodox one, prevalent in Myanmar, Sri Lanka, Thailand, Laos, Cambodia, Tibetan Buddhism, found in the regions surrounding Himalayas and East Asian Buddhism, consisting of religious bodies of China, Japan and Korea.

Tibetan Buddhism in turn has four main sects, with the symbolic representation of a Hat of a specific colour, one of which is Kagyu (meaning the 'oral teaching or lineage'), to which Milarepa, the 11th century mystic was a famous exponent. While Kagyu philosophy has various branches, Karma Kagyu is the most widely practiced one. It is also know as the 'Black Hat'.

In early 20th century, A lama had set up a small monastery for Bhutanese Kagyu in Darjeeling which later shifted to the foothills of Himalayas in a place called Bhutia Busty. One monk named Akka Dorjee of that Bhutia Busty Monastery, left and came to Calcutta in 1930s. He started staying at Alipore area and used to do puja for the Buddhist people of Himalayan origin settled here in Calcutta. Later he shifted to the place where the present monastery is standing i.e. 7 Chakraberia Lane Calcutta-700020 and with the help of some people of Himalayan Buddhist origin who had come to Calcutta for jobs, he started a small mud monastery in 1937. The monastery was christened as Himalayan Buddhist Gomba and a society was formed and registered with the same name. Later due to shortage of fund as well as monks the committee decided to hand over the monastery to his holiness the 16th Karmapa of the Rumtek Monastery (also known to be the Dharmachakra Centre), Sikkim in 1970. In 1971, the name of the gomba was changed to Calcutta Karma Gon Monastery and the new building was constructed in 1976-77.

The monastery not only caters the spiritual needs of the community but also provides shelter to the sick and poor community people who come to Calcutta for treatment or other purposes. Two sets of prayer wheels welcome you at the gate. 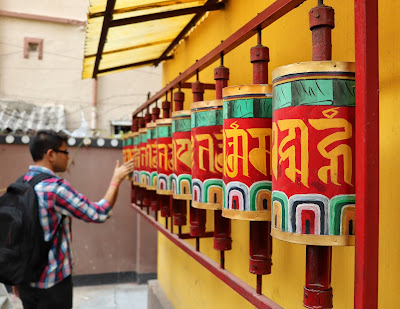 Ground floor is for resident community members. The deities and the prayer hall are in the 1st floor. The prayer room covers approximately 1500 sq ft area having large painted pillars inside. The beautiful mosaic design of the floor matches the painted ceiling. 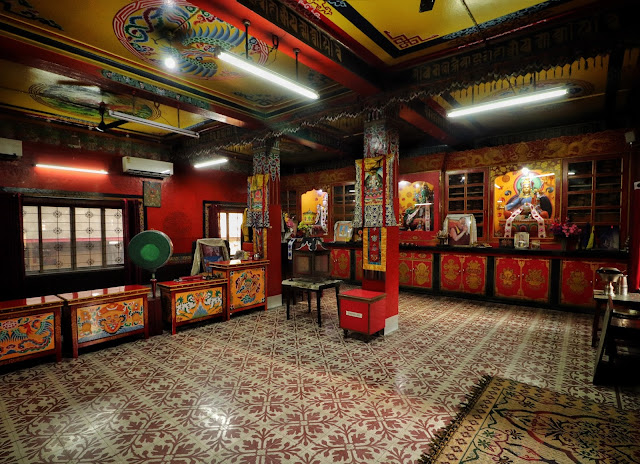 There are four deities all kept inside glass boxes. 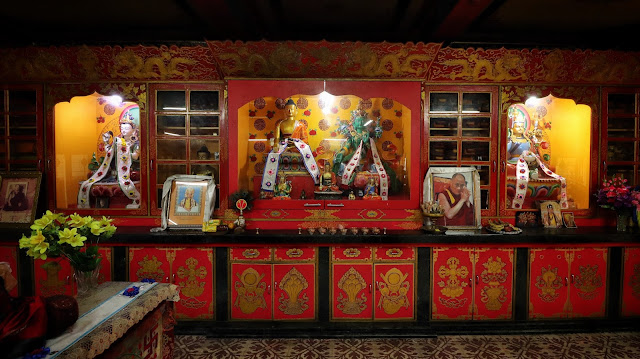 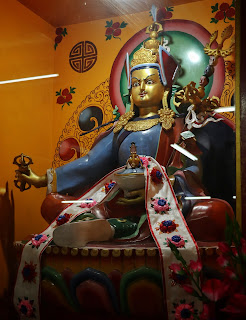 The one in the extreme right is called Guru Padmasambhava or Guru Rinpoche, known in Tibet as one of the founding fathers of Tibetan Buddhism, who appeared in Tibet in 749 A.D, and spent 54 years. 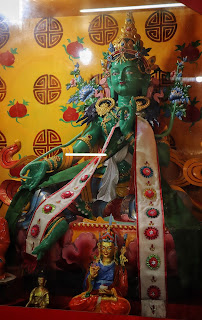 On his immediate left is Tara also known as Jetsun Dölma in Tibetan Buddhism. She is the "mother of liberation", and represents the virtues of success in work and achievements. 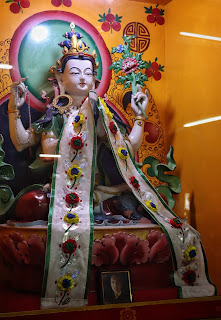 Next to Tara is the idol of Sangay, the Buddha himself and on the extreme left is Chenrezig mostly known as Avalokitesvara, the Buddha of compassion.

All deities are north facing. There is also a huge statue of 16th Karmapa in the prayer room. The room is filled with various paintings, depicting the myths of Buddhism. Once in the prayer room you can find a drum which is played during prayers and offerings which is done on regular basis twice a day. 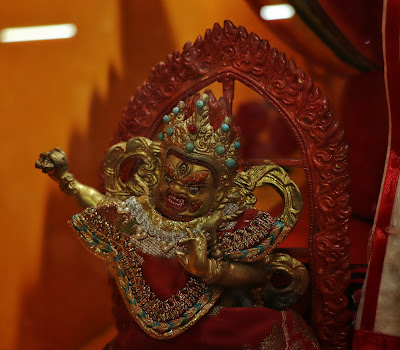 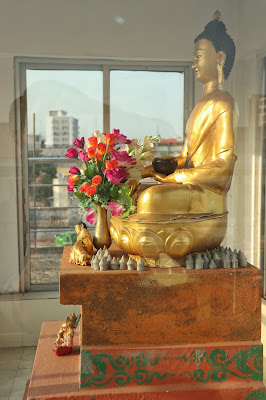 The rooftop is perhaps the most interesting place in the monastery. A beautiful “stupa” like structure can be seen. Inside, there is a statue of mediating Buddha. Underneath the statue there is an idol of “Ganesha” not to be confused as a symbol of communal harmony as the Ganesha of Buddhism is quite at variance with the god that Hindus are familiar with. He is the only Hindu God regarded as a Bodhisattva (Buddha-to-be). Ganesha is an ambivalent figure in Tibetan Buddhism. Some scriptures depict him as Vinayaka, a demon who must be propitiated in order to avoid destruction. He is also shown being trampled upon by a Buddhist deity, Mahakala. In another form, he is the Destroyer of Obstacles, Nritya Ganapati, the dancing god who made his way into Tibet through Nepal. As a red, many-limbed and fearfully armed deity, he is an emanation of Avalokitesvara, the Buddhist deity. 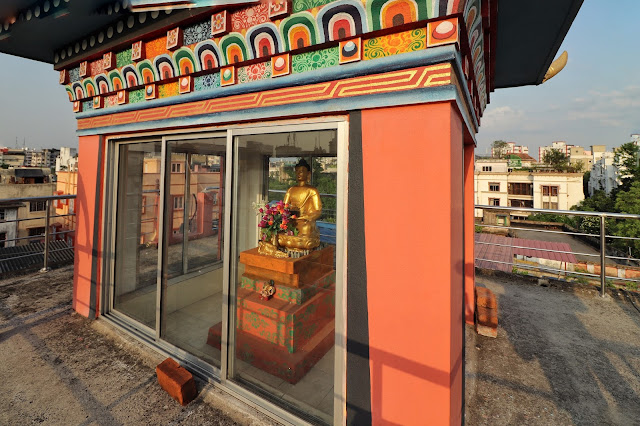 On the terrace colorful rectangular prayer Flags can be found stung horizontally from the top of the “Stupa”. Prayer flags are also tied around the wall of the terrace. Strictly speaking, these prayer flag would remind you the glimpses of the Buddhist Monasteries in Ladkh, Sikkim. 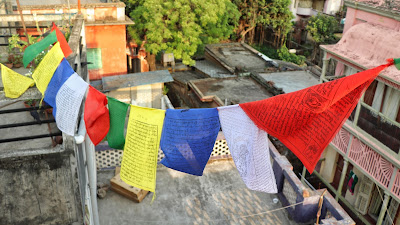 The monastery is affiliated to the Dharmachakra Centre, Rumtek and 17th Karmapa who is the head of Kagyu sect is presently the head of this monastery. The Karmapa lineage predates Dalai Lama lineage (belonging to Gelug Sect or Yellow Hat of Tibetan Buddhism) by more than two centuries. It receives occasional funds for major expenses like renovation etc. from Rumtek, however day to day expenses are met by the monthly contributions of the registered committee members and the donations of the devotees and well-wishers. The monastery has a registered society under West Bengal Society Act named as Calcutta Karma Gon Kidu. The kidu has a managing committee for the management of the monastery. The Executive Committee, President and the General Secretary are elected in the Annual General Meeting by the general members.

Several festivals are celebrated throughout the year. Buddha Purnima is celebrated on Baishakhi Purnima in the Gregorian calendar month of April or May as the day of Buddha’s birth, enlightenment (Nirvana) and death (Mahaparinirvana). Saga Dawa festival is celebrated on the fifteenth day of the fourth month of Tibetan calendar which falls in the month of May-June of Gregorian calendar. It is believed that it would accumulate immense merits during that particular day by giving generosity, stopping of killing of animals and eating meats, etc. Monks chanting in monasteries, cham dancing and other religious activities dominate the occasion. The festival is called Qiong ren Jie in Chinese which means poor people’s day because Tibetan peoples’ generosity to the poor people is well known. Drukpa Tse Shi festival is held on the 4th day (Tsheshi) of the 6th month (Drukpa) of the Tibetan Calendar around July or August every year to mark the event when Buddha first turned the Wheel of Dharma (His first sermon to five disciples at Sarnath). It celebrates Buddha's first preaching of the four Noble Truths to his first five disciples in a deer park at Sarnath. And last but not the least is the Lhabab Duchen festival celebrated to observe Buddha's descent from Tushita (heaven) back to earth. Buddha had left for The Heaven Of Thirty-Three (Trayastrimsa) at the age of 41, in order to give teachings to benefit the gods in that desire realm, and to repay the kindness of his mother by liberating her from Samsara. He was exhorted by his follower and representative Maudgalyayana to return, and after a long debate and under a Full Moon agreed to return. He returned to earth a week later by a special triple ladder prepared by Viswakarma, the god of machines. This event is considered to be one of the eight great deeds of the Buddha. In monastery, this festival is celebrated for five days as the most significant one. During this puja a procession is also taken out by the devotees to spread the teachings of Lord Buddha towards world peace. This festival falls on the 22nd day of the ninth lunar month of Tibetan calendar i.e October-November of the English calendar. 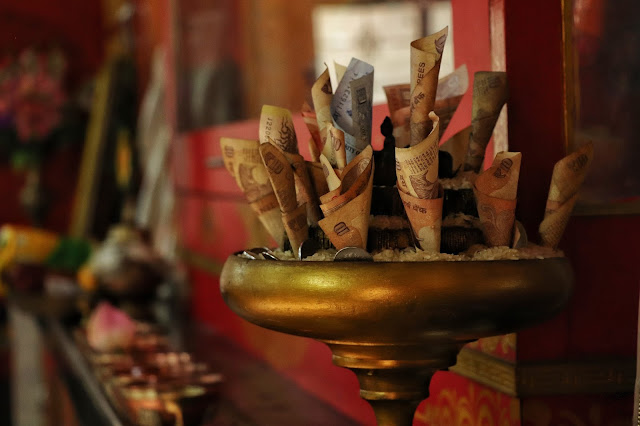 Buddhism has always embraced all. Anyone can take a refuge in it. So anybody from any community can visit Calcutta Karma Gon Monastery any day between 10 AM to 4 PM. It is standing like a sanctuary amid the forest of concrete. Once there, if you find the door is closed do not step back. As it says, the door of god opens only when you give it a knock. 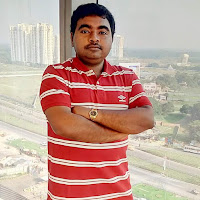 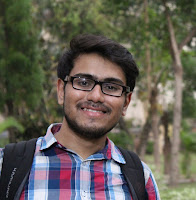 Both being finance professional, have curious minds and are history buff too. The duo used to roam around the streets of Calcutta to their leisure time and discovers the hidden gems.