If you enter into Keshab Chandra Sen street from Amherst street, you will find a simple yellow Church like structure on your right, partially obscured by electric transformers, cables and the large trees. But an inquisitive mind followed by a close look into the marble plaques in the entrance wall will soon reveal that the structure is BHARATVARSHIYA BRAHMO MANDIR founded in 1869 by Shri Keshab Chandra Sen. 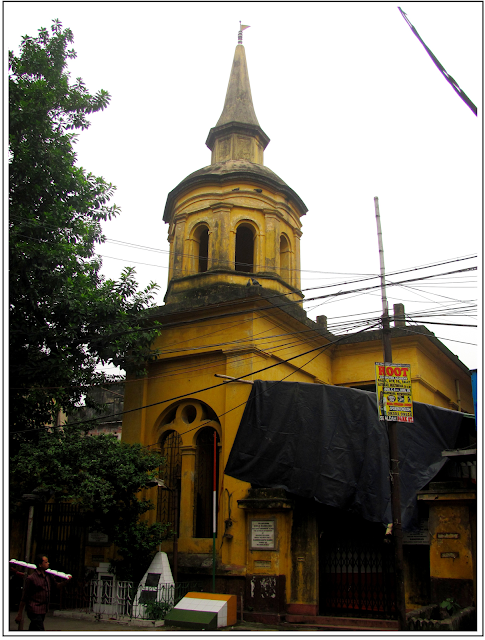 BRAHMOISM originated in the early 19th century with the objective of bringing a social reform in the Hindu religion. The man behind the movement was Raja Ram Mohan Roy. HINDUISM, being an ancient polytheistic religion, were full of its own dogma, rituals and superstitions. Ram Mohan Roy aimed to reform the religious practices based on the concept of monotheism and modern science. His prime influence behind it was the principals of Vedanta school of Philosophy as found in Upanishads.

Meaning of the name 'Brahmo Samaj' literally denotes the community of men who worships brahmin, though in reality Brahmo Samaj does not discriminate between caste, creed or religion and its an assembly of all sorts of people without any distinction.

After Ram Mohan Roy left for England in 1830, Trustees Dwarkanath Tagore and Pandit Ram Chandra Vidyabagish started to look after the affairs of the society. But eventually with the death of Ram Mohan Roy in Bristol, UK in 1833, the Sabha lost its spirit due to gradual fall in attendance and increasing practice of idolatry by the Sabha's Telugu Brahmins which was certainly contradictory to the motto of Brahmo Samaj i.e. monotheism.

On 6th October, 1839, Debendranath Tagore, son of Dwarkanath Tagore, established Tattwabodhini (Truth-Seekers) Sabha which was based on the philosophy of modern Vedanta. Pandit Iswarchandra Vidyasagar was one of its first members. In 1843 Debendranath and 20 other Tattwabodhini stalwarts joined the Trust of Brahmo Sabha on invitation and he introduced the much needed dynamism to the Samaj. The doctrinal change that took place was the abandonment of the belief in the infallibility of the Vedas.

Keshab Chandra Sen joined the Samaj in 1857 and dedicated himself to the organizational work of the Brahmo Samaj. However, probably from his earlier association with Goodwill fraternity, a masonic lodge and with Rev. Charles Dall, an Unitarian, Sen was convinced that only Christian Doctrine could bring new life to Hindu Society. Due to his belief in Christian practices in Brahmoism, a fallout took place with Debendranath Tagore and Sen was caused to leave the Brahmo Samaj.

A meeting was held on 11th November, 1866 at the house of the Calcutta College in which more than 200 people assembled and the Brahmo Samaj of India was formally established which was proposed by Keshab Chandra Sen. On the occassion of Magh Celebration  on 24th January, 1868, Sen laid the foundation stone of the mandir called the Tabernacle of New Dispensation. The newly constructed chapel was consecrated on 22nd August, 1869. 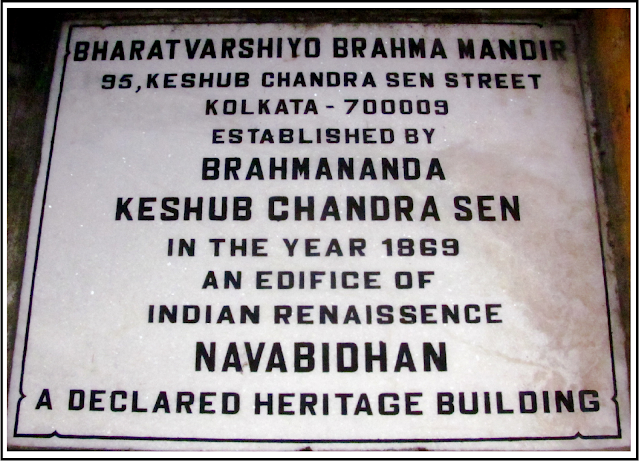 The structure of the Brahmo Samaj of India building is a combination of the architecture of a Hindu Temple and a Christian Church, reflecting the belief of Keshab Chandra Sen and Brahmo Samaj of India itself. On a Christian Church like Steeple, there is a chamber with eight sloped-roof similar to Hindu Aatchala Temples. On the top of it, there is a Spire topped by a flag as found it temples. The society is also known as Bharatvarshiya Brahmo Mandir. 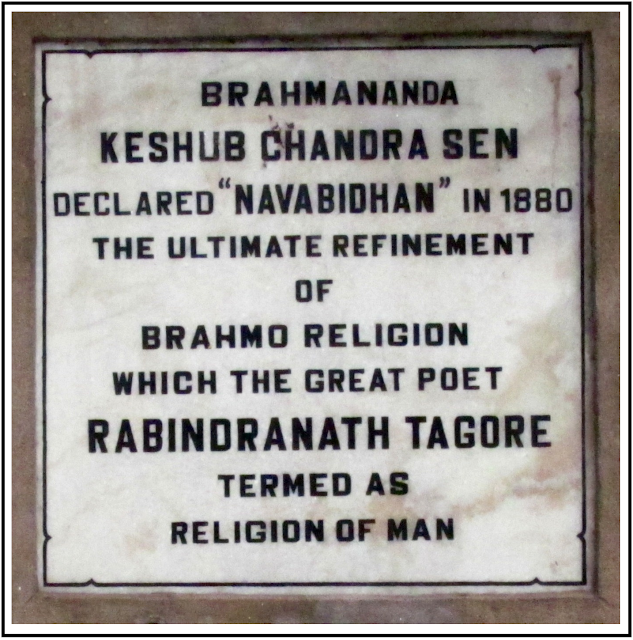 The new dispensation was announced in 1880 by Sen himself and the Samaj became known as Nababidhan Samaj.


Later, in 1878, became aggrieved by the deviation of Keshab Sen from his own philosophy, few distinguished men established Sadharan Brahmo Samaj which presently operates from its Bidhan Sarani building.