TALLAH TANK ... Quenching City's Thirst for Over a Century !!

"WATER WATER EVERYWHERE, NOR ANY DROP TO DRINK", at least 100 years before this Samuel Coleridge poem, Englishmen felt in the same way when they arrived in Calcutta in the late 17th century. Various reports of English authorities of that time suggests that in 1706 there were only 17 water bodies in Calcutta, on which the native population was entirely dependent for its water supply, in addition to Hooghly river. But there were scarcity of pure drinking water due to multipurpose usage of these water bodies by the native residents. The tanks were so polluted that the British were not ready to accept them as the hygienic source to quench their thirst. Ultimately in 1709, Lal Dighi or the Great Tank was renovated. It was one of the purest fount of drinking water and catered the needs of British people for another 100 years.

In 1820 a small pumping plant was set up at Chandpal Ghat for lifting river water into open masonry aqueducts which then supplied water using gravitation to areas like Tallah, Chowringhee, Park Street, parts of Lalbazar and Bowbazar. From October to March, the river water was said good for drinking and cooking but from April until the monsoons it was saline. In autumn, alum or muslin strainers were used to purify its turbidity. It was also a common practice among some people to collect the river water in February and storing it in jars until the rains came. In early 1860s it was found after analysing the water of Hooghly river that water drawn either at Palta or Chinsurah was comparatively pure.

Having considered various locations for intake and methods of filtration, the scheme of the then Municipal Engineer William Clark, was sanctioned by the local magistrates and Indian Government in Bengal in 1865. The proposed plan include an intake and settling tanks at Palta, North of Calcutta and an aqueduct 66,600 ft (16 km) long, bringing the supply to Tallah and on to Wellington Square where there was a service reservoir and pumping station serving Central Calcutta. Subsequently, Palta water works began in 1868 on about 482 acres of land to supply filtered water to the residents of the city, now renamed as Indira Gandhi Water Works.

At the dawn of twentieth century, population of Calcutta touched the million mark. To satisfy the demand of increasing number of residents, Wellington Square reservoir with its 790000 gallons capacity seemed to be insufficient. Need of something larger felt. Hence, the plan to set up Tallah Tank popped up. 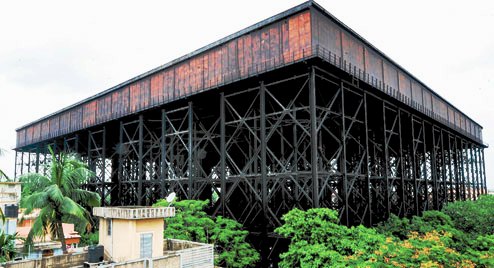 The land on which Tallah Tank is presently situated, was the property of Babu Khelat Chandra Ghosh, a well known philanthropist of the then Calcutta. Born in 1827, the son of Babu Deb Narayan Ghosh was a man with lot of dignity. Apart from being the Honorary District Magistrate, he was also a social reformer and close to British. The land for the reservoir was donated by him. To mark his generous contribution the adjoining lane was later renamed Khelat Babu Lane.

Tallah Tank was no less than a feat for civil engineering and metallurgy. Designed by the Chief Engineer of the then Calcutta Corporation, WB MacCabe, it is world's largest overhead water reservoir tank so far. According to the City's bare footed historian P T Nair, the area was called TALLAH because of the presence of 'TALAO' or several old tanks from which the water was pumped out and then a solid foundation was laid after proper piling to ensure that there was no lateral displacement of soil because of the huge load. The water itself weighted about 40,000 tons while the structure was about 8500 tons.

Indian firm T C Mukherjee & Co. was entrusted with the work of piling. Sir R N Mukherjee's firm Martin & Co. did the reinforced concrete foundation, the roof job undertaken by Arracon & Co. and Babu Kali Sunkar Mitter while the tank was itself fabricated by Clayton, Son & Co. from Leeds. The materials including the anti-corrosion plates were brought from England.

The construction work of this Iron & Steel marvel began on 18th November, 1909, in the presence of the then Lt. Governor of Bengal Sir Edward Baker. It was commissioned on 16th May, 1911 though the work was completed by January 12. Standing at a height of 110 feet, it is 16 ft. deep, spread over 1.03 lac sq. ft. which is equals to 7 bigha approx.

The entire tank is divided into four compartments which are independent of each other and hence can be cleaned or repaired anytime without disrupting the water supply. MacCabe had designed the tank to be a balancer. The unique feature of the tank is that there are no separate pipelines for filling up and delivery. The pumping engine at Palta is not capable of sending down sufficient water to meet the demand in the middle of the day when consumption is heavy, then the Tallah tank comes into operation. When sufficient water is not coming down to fill the town mains, water from the tank automatically flows in to the mains to keep supply equal to the demand. The tank is refilled again at night hours when the demand falls, by the same set of pipelines.

Survivor of the Earthquakes & Bomb Threats -

This 104 year old structure (106 if counted from 1909!), has developed only 14 leaks in its century old record of uninterrupted service which the present day Engineers may find to be amazing and unbelievable. There were widespread apprehensions during World War II that it might be bombed by the Japanese and hence the authorities had planted artificial grass cover on the roof of the tank to make it look like a playground to the pilots of enemy aircraft. Surviving the earthquake of Bihar and Bengal in 1934 also proved many speculations wrong.

A 2013 estimate of KMC stated that the cost of overhauling won't be less than Rs.25 Crores which is 500 times more than the cost of construction of Rs.5 Lacs. As a point of comparison it is often said that the Tallah Tank's equivalent quantity of aviation fuel would be enough to fill up 158 jumbo jets at a go !!

This B T Road behemoth which has never ever faltered so far undoubtedly has a place in the City's heritage map.