ENCYCLOPEDIA LANE ... A Mark of Respect Towards An Onerous Effort !!

In 2013, British author Neil Richard Gaiman made it to the headlines, for an unusual reason though. This bestselling author from England was honoured by the Portsmouth City Council in a distinguished manner. The Council of the city in which Gaiman's grandfather has once settled, decided to rename one of its street after Gaiman's award winning novel The Ocean at the End of the Lane, which is actually set in the landscapes in which Gaiman grew up. But it was not the first time in the world that a city street has been renamed after a famous book to appreciate its author. In fact, Kolkata took the lead in this exceptional initiative.

From Portsmouth, South England, cut to Bagbazar, North Calcutta. In the City's oldest neighbourhood there exists a narrow lane officially known as BISWAKOSH LANE. The bengali word 'Biswakosh' means the Encyclopedia. The lane indeed has a strong connection with the first bengali encyclopedia compiled by Shri Nagendranath Basu. The author himself lived here. 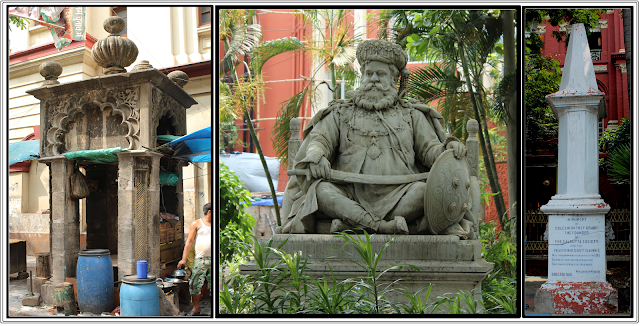 On the streets of Calcutta there are innumerable relics, monuments, memorials, plaques; reminding us of our Colonial past but these have sunk in oblivion of public memory, obliterated by parked vehicles or the tarpaulin sheets of roadside vendors or simply lying forgotten behind the weeds. There is hardly any signage to indicate either their background or historical value.

If you take a tour across Dalhousie-Esplanade area, which was once called 'Town Calcutta' and was the first developed area in the city, you will spot many such architectural marvels.

My today's article will indeed highlight four of them, generally overlooked by the daily commuters passing by.
Read more »
at June 20, 2015 2 comments:


Around 6 months ago, on a winter afternoon, I was at the Curzon Park Bus Stop, just opposite of Esplanade Mansion, waiting to meet someone. Suddenly, a dilapidated marble structure inside the park drew my attention. As there was no scope for a close examination (because in most of the time, the park remains closed), I decided to check KMC's list of Heritage Buildings. In Pg.45 of the publication, there is a mere mention of some PANIOTY FOUNTAIN as a Grade I heritage spot in the Curzon Park. When I started cultivating about it, I learned that the structure was built in the colonial time in memory of someone known as Demetrius Panioty.

Here, the question struck. Who was Demetrius Panioty and What was his contribution?...

Further research in the topic revealed details about a Greek Family which played a crucial role in the Colonial History of Calcutta as well as India, yet no elaborated accounts of them were mentioned anywhere.

So here goes the story that carries a 200 years legacy...

We all have that one (may be more, if you are lucky) big, fat, old family photo album which stores the best moments from our childhood. Often in family get together or at our leisure time, we keep revisiting them, reminiscing down the memory lane. It's also a very common practice amongst us to compare our present looks with that in the photo taken years ago ("Ohh, you had curly hair like Sachin!!", "My God, you were so thin then!!" etc. etc.) and the changes are sometimes very fascinating too.

Now, have you ever tried to imagine how our City looked like 70 years ago and what are the changes that took place in its prominent places? Be the answer is affirmative or negative, I, now present before you such 11 pair of photographs of Calcutta/Kolkata which were taken 70 years apart. So let's start our journey back and forth in time.