During the Bengal Renaissance of nineteenth century, many prominent names of the society chose to adopt Christianity and converted. Reverend Krishna Mohan Bandyopadhyay, Michael Madhusudan Dutt, Toru Dutt, Chandramukhi Basu are only to name a few. The scenario was similar in the remaining part of Colonial India too. With the increase in European settlements in India from 17th century onwards, conversion to Christianity from Hinduism was not a rare or surprising instance. But finding a British (technically Irish) dignitary, who inspite of adhering to his religion, embraced Hindu Culture, is a rare instance indeed !

In the 25th post, WANDERLUST explores an Irish Major-General who practiced idolatry, wore dhoti, used to bath in River Ganges, advised Memsahibs to wear Sari, built a temple, criticized European missionaries and has a Mausoleum in South Park Street Cemetery which looks like a temple !! 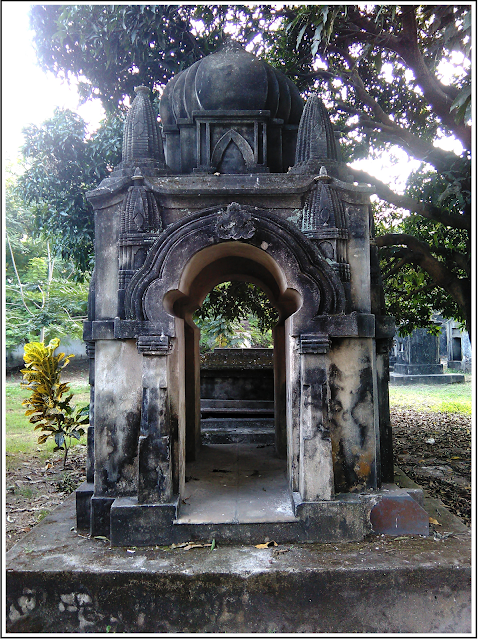 WHO WAS CHARLES STUART?

Charles Stuart was born in 1758 in Dublin, Ireland. His father was Thomas Smyth, an Irish politician. On 9th February, 1777, at the age of 19 Stuart sailed for India as a cadet in the East India Company Army. For the next 27 years, till 1804 he remained in the country and in the service. Until 1798 in the European, later in the native regiments. In 1803 he was promoted as Lieutenant-Colonel. But soon after his promotion, Stuart went on furlough, on 27th June, 1804 and returned to resume his service only on 7th December, 1809.

After his return to India, Stuart remained in military service until his death. He was promoted Colonel in 1811 and Major-General in 1814. During his second chapter in military services he commanded various regiments of native infantry, with the exception of 1819-1822, when he was the head of the Saugor Field Force in Saugor, presently a city in Madhya Pradesh. 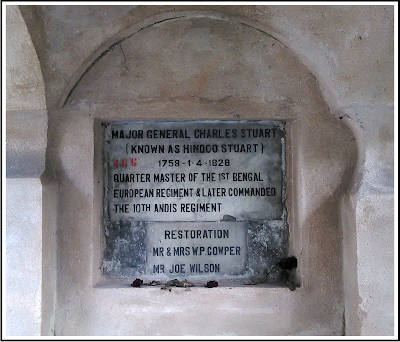 Stuart is well known for being one of the few British officers to embrace Hindu Culture while stationed in India. Interestingly he lived in both worlds, living not only an Indian life but also making sure that he did not lose the British tastes.

One might feel confused reading till now, so let's elaborate his activities which would certainly solve the mystery.

Neither during his first 27 years of service nor during his second chapter, Stuart have participated in any major battle. His peaceful military career might have induced him to develop a great concern towards the dress, discipline and adaptation to the oriental Hindu culture.

Stuart's first known literary activity occurred in 1798. He published anonymously a short tract on the dress, disciplines of the military, in which he suggested that the dress of the British Indian Army should be influenced from the India itself. Regarding discipline, he opined that the custom of sending absent soldiers to 'Drill' (a punishment then) should be reduced in the hot summer months. Finally, he questioned the discrimination between the Europeans and Indians in the Army and proposed to eliminate such racism.

In 1801, Stuart wrote a series of letters to the editor of the Calcutta newspaper - The Telegraph on the dress of European ladies in the East. He recommended to European ladies in India a fashion which was very close to Indian style. He suggested "elegant, simple, sensible and sensual" Indian Saris instead of the 'Busk's wore by the memsahebs. One of his logic rejecting the busk was that the busk with long pieces of steel makes women highly susceptible to lightning strikes !!

In 1808, during his furlough, he published his most famous work 'Vindication of the Hindoos', in two parts. He criticized the work of the European missionaries in India (including the attempts to convert natives). He Stated that Hinduism is self-sufficient and do not need Christianity to form a civilised society. But what Stuart missed was that the Conversion was just a measure of establishing a strong British foothold in the country.

After taking over as the commander of the 4th Native Infantry Regiment in 1813, he published new Regimental orders relating to dress and hair-styles. He allowed Indian Sepoys to wear caste-marks in the forehead and to grow full moustaches. Due to this decision he was at once suspended from his command and later transferred to another regiment. But the strange thing is that he was promoted to Major-General in the very next year (1814) !!

Seeing the degree of Stuart's inclination towards Hinduism, fellow British coined the term 'went native' mentioning him and he earned the nickname 'Hindoo' Stuart.

During the last years of his life, Stuart had a house in Wood Street. Different accounts suggests that he used to walk every morning from his house to bathe in the Ganges and wore 'dhoti', the traditional Indian male clothing. There he used to offer puja to idols and worship the Ganges.

Stuart's practice of idolatry was very famous. He used to collect idols of Hindu deities from across the country, either on his own or through agents. He had hundreds of them, from small lingams to monumental statues, many of them of excellent quality. However there have been accusations against Stuart for being an idol-stealer. Contemporary Brahmins as well as the scholars of later era alleged that he used to cut the sculptures from temples but the allegations do not seem very credible.

Stuart had a vast and priceless collection of artifacts. His house at Wood street included a museum, open to the public of similar interest. The collection contained furniture, books, objects of natural history, ethnographic objects, weapons, jewellery and Indian antiquities specially Hindu, Buddhist and Jain art. After his death, as per his will the collection were sent to Britain and auctioned at Christie's in 1830. A large part was acquired by J Bridge who later donated it to British Museum where it forms under the misleading name of 'Bridge Collection', till date the nucleus of the Museum's Oriental collection.

Though the collection were auctioned but many idols remained in that house when it was occupied in 1829 by Swiss-born missionary Lacroix. An ironical fate indeed for the house of the man who opposed missionaries throughout his life. 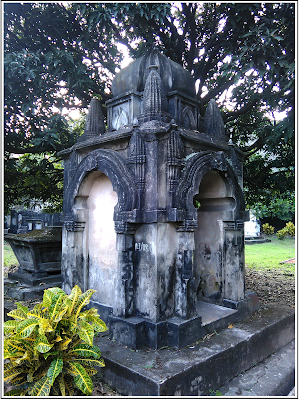 Stuart died on 1st April, 1828 aged 70 and buried at the South Park St. Cemetery. Several idols from his collection were also placed at his final resting place. On his grave, a mausoleum in the shape of a Hindu temple with Indian sculptures from his collection, was erected. Though much mutilated, it still exists. Stuart, an admirer of Hinduism throughout his life wanted a cremation. But as he was a colonial British Army officer, British denied his last wish but allowed the tomb to be constructed like a temple. 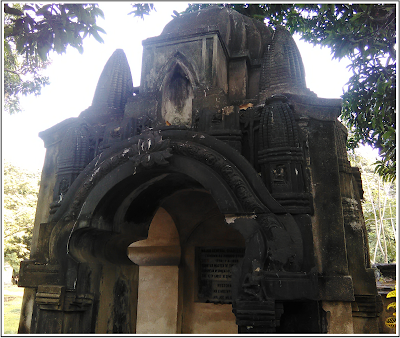 Whenever you visit the cemetery, don't miss the grave 466 at southwest corner. You will be amazed whether it is tomb or temple ??!!

AN ADHERENT OF CHRISTIANITY, ADMIRER OF HINDUISM -

Though Stuart was inclined to Hinduism but was never converted though. Firstly at that time, Hinduism hardly accepted converts, least of all Europeans and on the other hand, if converted it would certainly hamper Stuart's position in the British Service. In his book, Stuart admitted to being Anti-Christian but not converted to Hinduism !!

William Dalrymple, widely acclaimed Scottish historian and writer mentioned Stuart in his 2002 book 'White Mughals' as the admirer of Indian Religions. In the current era of global religious intolerance, Charles 'Hindoo' Stuart would stand as an exceptional figure indeed.

WHY I CHOSE 'HINDOO' STUART AS MY 25TH POST?

I was never very keen to Calcutta's history or its heritage points. It was limited to some unplanned visits to Victoria Memorial or Museum in winter afternoons. But six years ago, a very same winter afternoon changed my whole perspective towards Calcutta forever.

In 2009, during my graduation days I used to work as an intern in a private firm. On a December afternoon I was at Park street to meet one of our clients. I reached an hour before the appointment. So, just to kill the time I entered South Park St. Cemetery, for the first time in my life. I read about it in Bengali sleuth Feluda's story 'Gorosthane Sabdhan' and somewhat curious about it. When I came out, almost two hours had passed (in between I told my client that I got struck in a traffic jam). On that day, the tomb that intrigued me the most was that of Charles 'Hindoo' Stuart. To know more about him, I started studying, first googled about Stuart, then studied about the cemetery and from there on about the Colonial Calcutta. Its a never ending voyage and the thirst is not yet quenched.

Since 2009 I have been in the Cemetery for more than 25 times and always wished to make a story on the Major-General who acted as my 'Bornoporichoy' towards the City of Joy. So as WANDERLUST completes its 25th post, it can't be anything else than the HINDOO STUART's MAUSOLEUM...