It is not everyday that you get to know the best in class bloggers and photographers of Kolkata through a single walk. Oxford Bookstore made it possible and for me it was a golden opportunity. So I decided to board 'no 11' on 10th October from Maniktala at 7.30 am sharp.

The objective of the journey was to explore the landmarks of Bengali literature and stalwarts, organized as the part of the APJ Bangla Sahitya Utsob 2015 in association with Oxford Bookstore, Streets of Kolkata, Kolkata Bloggers and Bengali Wikipedia. Our pilot was Mr. Amitabha Gupta (Heritage Enthusiast, Travel Writer and Photographer) who had not only chalked out the route but also lead throughout from the front. My co-walkers include some prominent names of Kolkata's blogger and photographer community - Deepanjan Ghosh, Indrajit Lahiri, Soumya Shankar Ghosal, Sammya Brata, Srotoswini Svetlana Baghawan, Indrajit Das, Sumit Surai, Subhadip Mukherjee to name a few.


The route was mainly centered around the Maniktala-Amherst Street area which was once the Home and Workplace of leading people of Bengali Renaissance.

Surprisingly our first point was a Petrol Pump !! If you walk towards Rajabajar from Maniktala crossing, you will find two petrol pumps on your right and I'm talking about the second one. Once the premise was the Press of PROBASI, a monthly Bengali language literary magazine founded by Ramananda Chatterjee in 1901. The magazine continued to exist till 1960s. As the accounts of the local senior people goes, the Press was active till 1940s, remained dilapidated after that and finally demolished in the 90s. Rabindranath Tagore published regularly in it from 1914 until his death. His major creations reached Bengali households through Probasi. 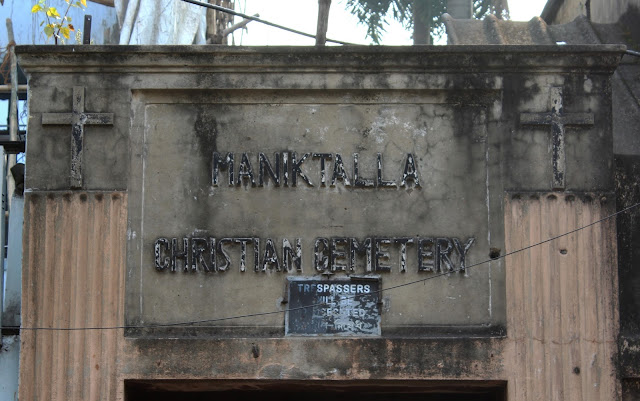 Toru Dutt or Torulata Dutt was the first Indian women to write proses and poetry in both English and French. Born to Govind Chunder Dutt and kshetramoni Dutt of Rambagan Dutt family, she did her higher studies in French from England. Largely influenced by David Hare, William Carey and Alexander Duff, Dutt family embraced Christianity in 1850s. Located behind the Leprosy Mission Hospital in Maniktala, the Christian Cemetery housed the grave of this brilliant poetess who died young at the age of just 21 in 1877. The enclosure at the eastern corner of the cemetery also contains the graves of her parents, her elder sister Aru and brother Abju. 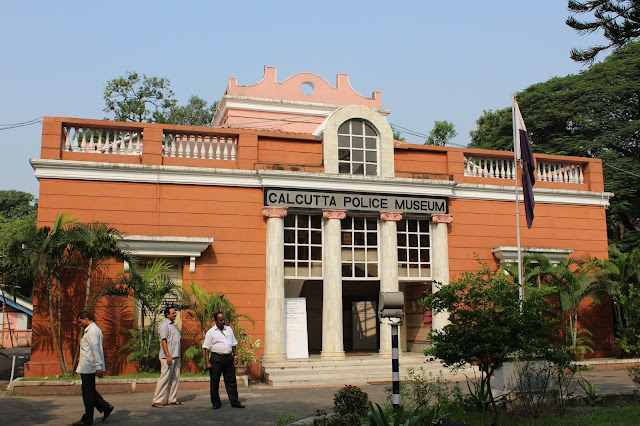 Located at 113, Acharya Prafulla Chandra Roy Road, this museum of Kolkata Police has recently hit the headlines for the exhibition of confidential Netaji files disclosed by West Bengal Govt. The building was actually the residence of Raja Rammohun Roy who stayed here till his journey to England. The museum brings forward the glorious history of Police Administration in Calcutta. The exhibits include guns and weapons recovered from the revolutionaries during pre-independence days.

Rammohun Library and Free Reading Room, situated at the crossing of APC Roy Road and Sukeas Street, was established in 1904 by some Bengali literary stalwarts, as a tribute to Raja Rammohun Roy. The four-storeyed building with the historical auditorium at ground floor is a treasure trove for book-lovers. 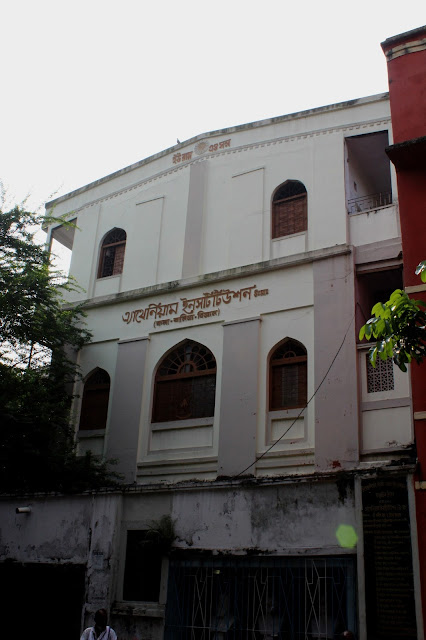 The building at 100, Garpar Road is a milestone in Bengali literature and culture. Built in 1914 by Upendrakishore Ray, the children litterateur, inventor of half-tone block making technique and the creator of 'Gupi Gayne, Bagha Bayen', this building now houses Athenaeum Institution. Satyajit Ray was born here in 1921 and spent his infancy in company of his dying father Sukumar, another Genius in the world of literature. We get a detailed description of this remarkable house from the reminiscences of Satyajit Ray - 'Jakhon Choto Chilam' (My Childhood) with a sketch. 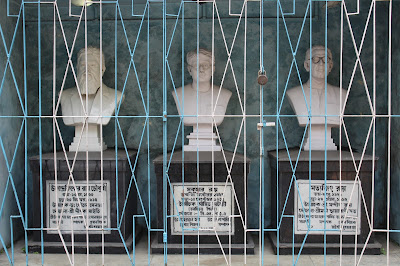 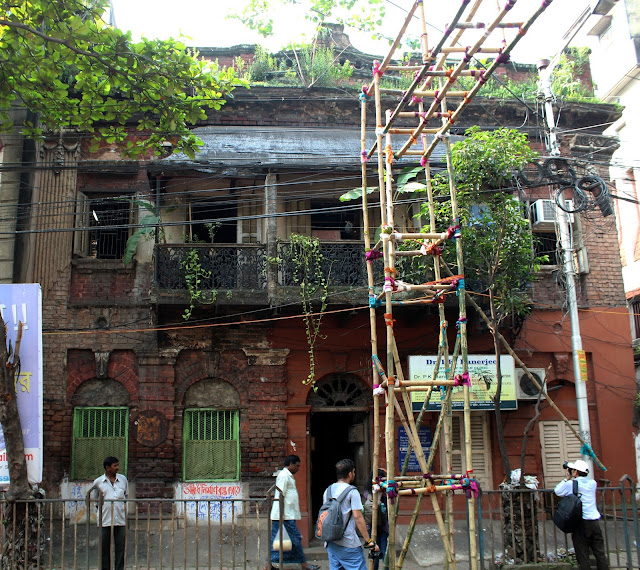 Our next destination was the house in which Upendrakishore Ray stayed before shifting to 100 Garpar Road and this is the place where 'Sandesh', the Bengali children's magazine was first published in 1913 by M/s U Ray & Sons. This point was a surprise to most of us as none were aware of it. If one enters Sukeas Street from APC Roy Road, the old red house will be on left just after Mahendranath Sreemany's century old house. 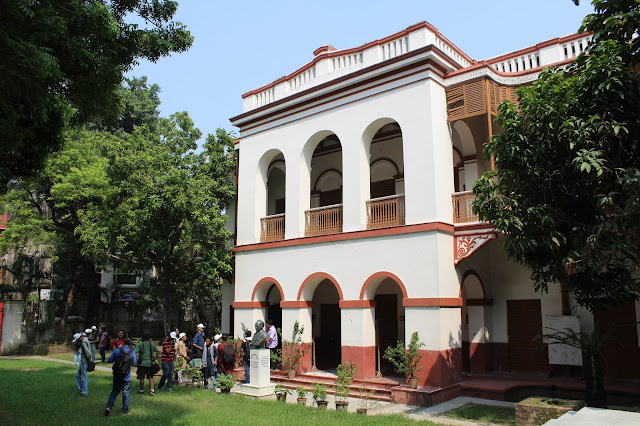 The Kolkata residential house of Pandit Iswarchandra Vidyasagar at 36, Vidyasagar Street is presently a campus of Vidyasagar College for Women. The premises now renamed as Vidyasagar Smriti Mandir houses a museum, the college campus and a special study centre of IGNOU. There is also a 20X60 ft terracotta mural on life and works of Vidyasagar, sculpted by Prof. Biman Das, a renowned sculptor and partly financed by Victoria Memorial Hall.

On our way to the House of First Widow Remarriage, we took a 'sweet' break at an Amherst Street sweet shop and Amitabhada briefed us about the palatial house on the opposite - Rammohun Roy Memorial Museum. Earlier known as 'Simla House', this house was purchased by Raja Rammohun in 1815 though he never lived here. The building was for the use of his family members. Central Govt. acquired the property in 1986 from the unauthorised occupiers. 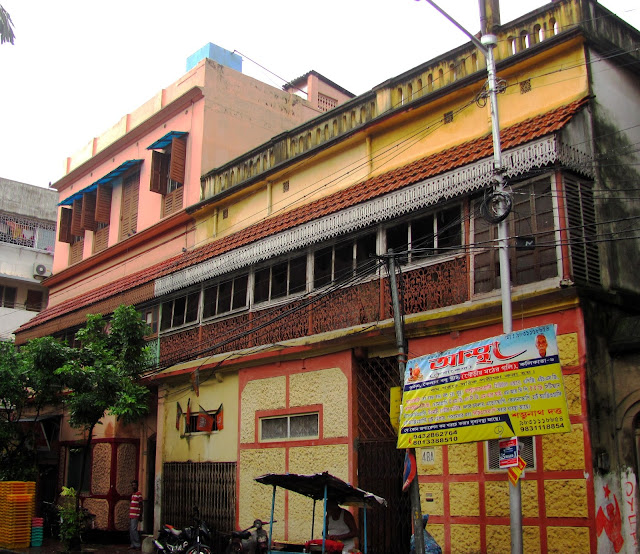 Earlier 12 Sukeas Street, now 48 Kailash Bose Street was the venue of first legal widow remarriage of India in 1856. After the enactment of Widow Remarriage Act in 1856 at the initiative of Pandit Iswarchandra Vidyasagar, the marriage took place in this house which was then under the ownership of Raj Krishna Bandyopadhyay. For the details about the house and the marriage you can go through my earlier blog post HOUSE OF FIRST WIDOW REMARRIAGE

On our way to the last destination, printing press of Patra Bharati, we came across an architectural grandeur on our right on Amherst Street - the house of Hrishikesh Laha. He was a renowned trader of Subarnabanik community in the then Calcutta. Later this Philanthropist man became the honorary magistrate also. The building has a small division of 'Aajkal' newspaper and now a days used as a prominent shooting location for various bengali films, specially the ones directed by Anjan Dutt !! 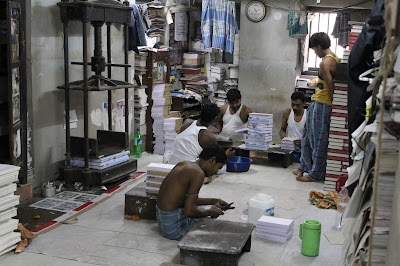 As the walk was the part of Bangla Sahitya Utsob, hence the journey concluded with a visit to the Patra Bharati Printing Press, from which the 'Kishore Bharati' magazine is published. The encounter with the process of printing, book binding in detail was really intriguing and our voyage came to an end here.