HOUSE OF THE FIRST WIDOW REMARRIAGE ... Breaking the Social Anathema !!

(Long Live Vidyasagar for the Initiative taken,
Now the Widow can get married again)

This mid-nineteenth century Bengali couplet refers to the historic episode that we all read about in school level history. The Widow Remarriage Act, 1856, passed at the initiative of Pandit Iswarchandra Vidyasagar, permitted the Hindu widows to get remarried, legally.

29th July, 2015 was the 125th death anniversary of Iswarchandra Vidyasagar. This article is WANDERLUST's little homage to the Lionhearted Man of Steel.


Under the patriarchal system of Indian Society, Women were subjected to various customs, rituals, prejudices since long. Practices like Child Marriages, Sati, Jauhar, Purdah, Prohibition on Remarriage by widows put their life into an ordeal. The condition of the Hindu widows were probably the worst. Polygamy and Child marriages were a widespread practice then. Often after the demise of first wife, old men get married mostly to a girl child, whose age could be as low as 8 or 10. As an obvious consequence, after the eventual death of husband, the young widow was either forced to commit suicide as Sati (in case of upper caste families) or lived the remaining life full of penances as a widow, secluded from the society.

Hindu widows especially were faced with a battery of societal taboos; higher their caste, the more restrictions widows faced. Traditionally when a man died, his widow was expected to sacrifice all earthly pleasures. Most ironically it was the widow who was cursed for her husband's death! They were expected to wear only simple white sarees for the rest of their lives. They can no longer wear any jewellery or may not even be able to wear a blouse under her saree. An orthodox widow may be expected to cut her hair or even shave her head. Her diet was also strictly restricted and forbidden to eat meat, fish or egg. She was also expected to fast several times a month. In addition a widow was considered inauspicious and were not permitted to attend the rituals and celebrations.

The very first blow against these prejudices came in the form of BENGAL SATI REGULATION, 1829 passed by the then Governor General Lord William Bentinck at the initiative of Raja Rammohan Roy, prohibiting the Satidaha Pratha or Practice of Sati in all jurisdictions of British India and making it subject to prosecution.

The next giant leap towards the women empowerment was by none other than Pandit Iswarchandra Vidyasagar. Being an impassioned supporter of female education and an opponent of polygamy, he devoted his life to improve the status of hindu widows and wrote lengthy tracts, substantiating his positions with scriptural citing and historical data. 15000 copies of his first tract supporting widow remarriage were sold out in 3 reprints but still people were not convinced. But Vidyasagar pressed on and urged the British to pass a legislation that will allow the Hindu widows to remarry. It was met with strong disapproval from the anti-reformists throughout the country. Despite such a powerful opposition, Vidyasagar sent an application to the Indian Legislative Council signed by 987 people for the promulgation of the Hindu Widow Remarriage Act. The last signatory to the 18 page memorandum was Vidyasagar himself. The members of the council finally decided to support the enlightened minority and passed the HINDU WIDOWS' REMARRIAGE ACT, 1856.

Now it was the time to set an example. The first widow remarriage took place following hindu customs and traditions, between Srischandra Vidyaratna Bhattacharya, son of Ramdhan Tarkabagish, a close friend of Vidyasagar and 10 year old Kalimati, daughter of Brahmanda Mukherjee and Lachmani Devi. It took place on Sunday, 7th December, 1856 or 12th of Agrahayan, 1263 as per Bengali Calendar at 12 Sukeas Street (now 48 Kailash Bose Street) in North Calcutta. Invitees were about 800.

Kalimati was first married when she was only four and had lost her husband when she was six. Srischandra was holding a job as the assistant secretary of Sanskrit College. The house belonged to Rajkrishna Bannerjee, who often invited Vidyasagar to have lunch at his place. Kalimati and her mother were at Bannerjee's residence. The bridegroom came to Calcutta and stayed at Ramgopal Ghose's house. On Sunday, several pandits and dignitaries assembled at the reception. Sukeas Street and its surrounding areas were over crowded with thousands taking to the streets to get a glimpse of the groom who would be the first to tie the knot with a widow. Vidyasagar had foreseen such a large gathering and was aware that he would have to counter various other obstacles so he sought the help of the police, who closely guarded the road which the groom and his party would use. 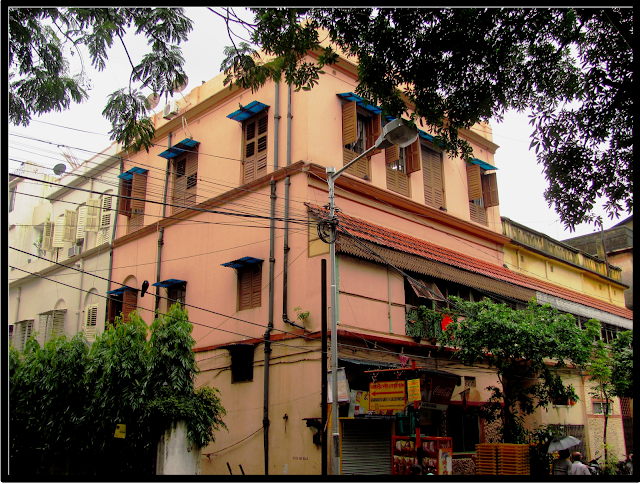 Eventually the groom and his accompanists, along with Ramgopal Ghose, Sambhunath Pandit, Dwarakanath Mitra and other friends of Vidyasagar, entered the venue. Jai Narayan Tarkapanchanan, Bharatchandra Siromoni, Premchandra Tarkabagish and Taranath Bachaspati were among the well-known Sanskrit scholars who were present on the day of the wedding. The first widow remarriage evoked a mixed reaction. The Tattwabodhini and the Bengal Spectator were all in praise for Vidyasagar.

From its reports we come to know that Vidyasagar gifted the bride her nuptial sari and ornaments and defrayed other expenses of the marriage.

The House of the First Widow Remarriage is still there at Kailash Bose Street, though a little altered in the character. The house is now divided into 3 parts. The back portion, in white, having entrance on Jadunath Sen Lane is owned by Sarba Bharatiya Sangeet-O-Sanskriti Parishad since 1983. The frontal part is divided in two. The right segment of the building in yellow bearing address 48A is still under the ownership of the descendants of Raj Krishna Bannerjee while the left segment i.e. 48B found its new owners, at sometime during the last decade. Being born and brought up in the very same neighbourhood, I can distinctly remember the marble plaque on the top of one of the gateway, commemorating the historical event of 1856 but now it was removed, probably during the renovation work.

But an interesting anecdote is though the marriage taking place on that particular day was indeed the first widow remarriage after the legislation was passed, Dakshinaranjan Mukhopadhyay, a key member of Derozio's Young Bengal had already done the unthinkable. He had married the queen of Burdwan, Basanta Kumari, the widow of King Tejchandra, two decades before the enactment of the legislation. Himself being a Brahmin had married not only a widow but outside his caste, that too for love.